Q&A: What is going on at Hanergy? 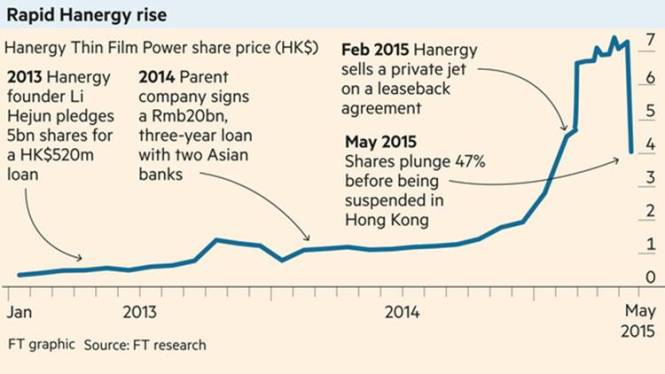 What happened at Hanergy on Wednesday?

Hanergy Thin Film Power, the world’s biggest solar company by market capitalisation, has suffered a major reversal of fortunes. Its share price has surged almost 600 per cent in the past two years, but on Wednesday the stock dived. HTF’s Hong Kong-listed shares plunged 47 per cent, from HK$7.01 to HK$3.88, in just 24 minutes. This knocked HK$130.1bn (US$16.7bn) off the company’s market capitalisation, and therefore produced a big paper loss for Hanergy group chairman and founder Li Hejun. He is the controlling shareholder in both Hanergy group and its subsidiary HTF, and is one of China’s richest people. HTF’s Hong Kong-listed shares are now suspended from trading, at the request of the company.

What triggered this stock fall?

It is hard to say for certain at this stage. HTF held an annual meeting with shareholders in Hong Kong on Wednesday but Mr Li, who owns a net 74.96 per cent of the stock according to regulatory filings, did not attend. Hanergy said Mr Li was at the opening of the Hanergy clean energy expo centre in Beijing. The company provided this picture.

Why is the stock decline important?

HTF is not just the world’s biggest solar company by market capitalisation — its value before the fall was greater than Tesla or Twitter.

The sudden share price plunge is likely to raise questions about the corporate governance and regulation of large Chinese companies that are increasingly doing business and raising funds outside of China.

The Beijing-based Hanergy group announced in 2011 that Mr Li had secured a controlling stake in a Hong Kong-listed company now known as HTF.

HTF was also one of the most prominent beneficiaries of something called the Shanghai-Hong Kong Stock Connect — a scheme launched last November that, for the first time, allows mainland Chinese investors to trade shares outside of China using their local brokers. This has been a key step in the opening up of China’s capital markets.