Chinese ‘Virus’ Spreads To Germany: Meet The Company That Went From Record High To Zero In 1 Week

It appears the frauds, falsehoods, and f##king fallacies are all being exposed at the same time. While we have noted three companies that have collapsed in the last week – destroying their billionaire owners’ wealth in the process – it appears the Chinese capital destruction virus has spread to Germany. Joyou AG – a Chinese affiliate of German bathroom manufacturer Grohe – has collapsed from record highs a week ago to 0, pending bankruptcy, after admitting balance sheet manipulation.

The following ‘real company’ employs over 4000 people in Nan An, China. Jianping “Dorothy” Wu is the CFO. It was a €400 Million company a week ago… And this just happened… 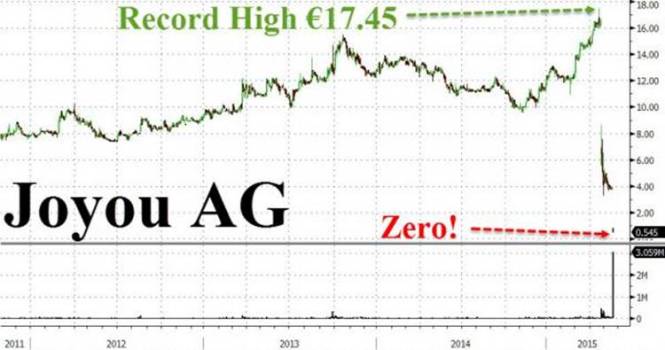 Joyou says it must be assumed that a loss of more than half of registered share capital of company has occurred.

Management to convene meeting of shareholders.

Joyou says management board examining whether to file an application for opening of insolvency proceedings.

For those with questions, here is Ulf Von Lengerich – a European analyst who has a €21 target for the company…

Last but not least, have fun recovering anything in this particular bankruptcy process.