Hanergy Holding Group chairman Li Hejun became China’s richest man by some estimates when shares in his energy company’s subsidiary, Hanergy Thin Film Power Group, soared. The share price fell 47% on May 20 and trading has remained halted since then.

Three months before the bottom fell out for Li Hejun, the Chinese billionaire threw a party for his employees. There was a laser show, acrobats and a Mercedes-Benz giveaway. But the highlight, those in attendance said, was when Mr. Li, chairman of Hanergy Holding Group Ltd., declared in a rousing speech that he was building Hanergy’s publicly traded solar subsidiary into a $100-billion company. There was reason to celebrate. The subsidiary, Hanergy Thin Film Power Group Ltd., in two years had catapulted to a multibillion-dollar valuation and was a Hong Kong stock-exchange star. By April, its market capitalization would exceed $40 billion—more than Sony Corp.’s—making 47-year-old Mr. Li China’s richest man by some estimates. Mr. Li touted tie-ups with IKEA Group, Tesla Motors Inc. and Aston Martin Lagonda Ltd. as steps in his dream of bringing solar power to the masses. He had announced solar-energy projects around the world, from Ghana to Japan to the U.S. Then, on May 20, the subsidiary’s shares plummeted 47%, erasing $18.6 billion in value—and almost half Mr. Li’s fortune—before trading was halted. Shortly after, Hong Kong securities regulators announced they had been investigating the subsidiary. Trading in its shares remains suspended. 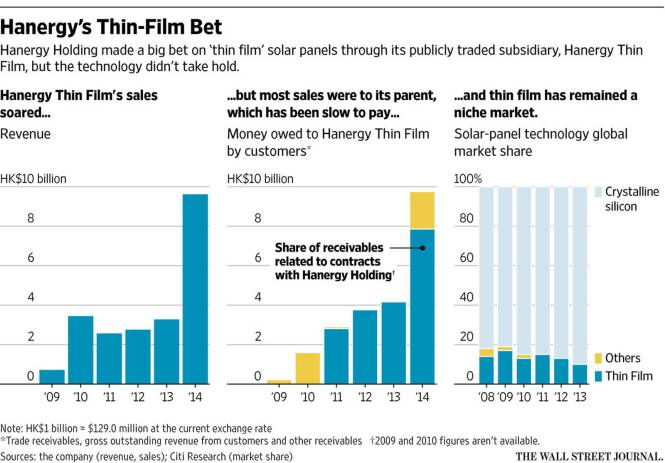 END_OF_DOCUMENT_TOKEN_TO_BE_REPLACED

Receiver Robert Seiden settled with Shengtai Pharmaceutical and is pursuing others

For some U.S. investors trying to hold Chinese companies to account, Robert Seidencould be the last, best hope.

Shareholders lost billions of dollars when a wave of U.S.-traded Chinese companies were tarnished by accounting and disclosure concerns in recent years. But U.S. investors have largely been stymied when pursuing Chinese companies in court. Many have simply “gone dark,” abandoning U.S. markets and ignoring U.S. court judgments, and it is hard for investors to go after them in China’s semiclosed society. END_OF_DOCUMENT_TOKEN_TO_BE_REPLACED