Issues with related parties played a prominent role in the scandals that surfaced more than a decade ago at Enron, Tyco International and Refco. Public outrage about these scandals led Congress to pass the Sarbanes-Oxley Act of 2002 and establish the Public Company Accounting Oversight Board (PCAOB). Similar problems have arisen in more recent financial reporting fraud cases, prompting the PCAOB to unanimously approve a tougher audit standard on related-party transactions and financial relationships. END_OF_DOCUMENT_TOKEN_TO_BE_REPLACED

I had meant to take a stroll down Memory Lane, or maybe a Nightmare on 18th Street, where 10 years ago in the cold I waited on the corner with a gaggle of other reporters for Richard Scrushy to approach the federal courthouse. END_OF_DOCUMENT_TOKEN_TO_BE_REPLACED

The year 2015 is going to be a challenging one for South Korean financial institutions, which face a series of penalties for loan and accounting fraud, as well as pressure to find new business models in the financial technology sector. Local banks, for instance, are expected to begin the year with hundreds of administrators and employees receiving sanctions for their irregularities. The Financial Supervisory Service is poised to take disciplinary action in the next two months against officials involved in loan fraud at KT ENS, the accounting fraud at Moneual and Shinhan Bank’s illegal access to customer accounts. END_OF_DOCUMENT_TOKEN_TO_BE_REPLACED

Until six years ago, Mohsen Pahlevan Moghadam ran a small tourism business and a shish-kebab restaurant. But now the Iranian is accused by Gholam-Ali Sadeghi, prosecutor in Mashhad, of fraud that Iranian media says is worth as much as 940tn rials ($34.3bn), although judiciary officials say the value is still under investigation. Mr Pahlevan, who has not been formally charged, denies the allegations. END_OF_DOCUMENT_TOKEN_TO_BE_REPLACED

80% of Indian respondents support the potential of emerging technologies such as Big Data to strengthen the compliance and anti-fraud efforts of organisations, states EY’s 2014 global forensic data analytics survey, Big risks require big data thinking. However, according to the report, there is a low adoption and awareness around deploying the right tools which manage fraud and bribery risks, only 3% of the respondents surveyed were aware of them. It also states that regulatory compliance with respect to global anti-corruption laws, recent enforcement trends and increased focus on data privacy are the key factors fueling the design and use of forensic data analytics (FDA) among Indian organisations. END_OF_DOCUMENT_TOKEN_TO_BE_REPLACED

TAIYUAN, China — On a chilly day in January 1999, Xue Wenjie, a young government bureaucrat, walked into the Taiyuan City Commercial Bank, plunked down less than $1 in registration fees and opened two new bank accounts. A few hours later, he wired $1.2 million in social-security funds into the new accounts.

The transfers were the start of a financial scam. Mr. Xue, who managed the funds for the government, had cut a deal with a senior manager at the Taiyuan bank to move the money there temporarily in return for a kickback. By the time Mr. Xue was arrested last year, nearly $32 million had been surreptitiously lifted out of the social-security fund, as well as from corporate and individual bank accounts. Along with Mr. Xue, the senior banker and others, the scam also allegedly involved the owner of an upscale restaurant who needed cash to pay off her debts. END_OF_DOCUMENT_TOKEN_TO_BE_REPLACED

(1) A little-known Hong Kong-listed firm has come out of nowhere to become the world’s largest solar-power company by market value. A tight relationship with its parent company should give investors reason to worry whether its time in the sun will last (Link)

Miles Johnson in London and Lucy Hornby in Beijing

It is a Chinese company that promises to revolutionise the way solar power is used and to become the Apple of green energy. The breakneck growth of Hanergy Group, the world’s largest solar company by market value, has helped to make its founder China’s fifth richest man. Shares in its $18bn Hong Kong-listed subsidiary, Hanergy Thin Film Power Group, have risen more than 300 per cent since the start of 2014. Hanergy is building factories across China and has snapped up four overseas developers of thin-film technology — a still evolving application — since 2009. Founder Li Hejun has told investors that Hanergy Group is destined to become the industry leader although, as yet, only a 10th of the world’s solar production is of this thinner, lighter technology because costs are higher than for other panels.

The Financial Times, in analysing recent financial statements of the company, has found some unconventional practices behind Hanergy Group’s soaring fortunes. It has been racking up enviable revenues largely through sales between its listed subsidiary, HTF, and itself. While many of its rivals have struggled to remain profitable, HTF, which sells equipment used to make solar panels, has reported net profit margins of over 50 per cent. 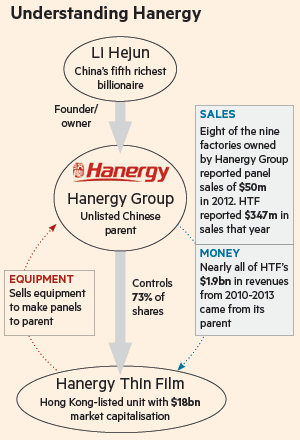 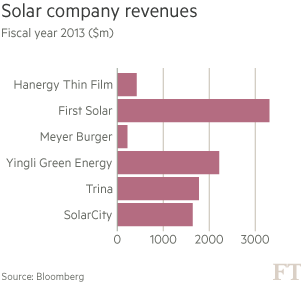 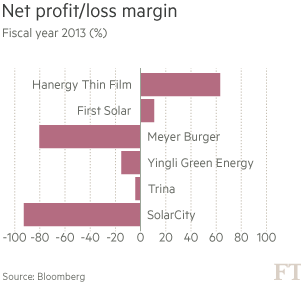 END_OF_DOCUMENT_TOKEN_TO_BE_REPLACED

Vocation chief Mark Hutchinson ‘should have been axed earlier’

Former CEO Mark Hutchinson announced Vocation’s bottom-line loss was expected to be $27 million – almost $60 million worse than a profit forecast made by the company in December. Photo: Nic Walker

The largest shareholder in ailing education firm Vocation is warning against a “fire sale” of assets and says the board squandered an opportunity for a more timely restructuring by not removing chief executive Mark Hutchinson last year. END_OF_DOCUMENT_TOKEN_TO_BE_REPLACED

“The increase in the number of fines issued, and their size, is no accident” – Freshfields

The Securities and Futures Commission substantially increased its enforcement activity last year as a study showed it has issued 56 per cent more disciplinary and criminal actions against companies and individuals last year than in 2013. END_OF_DOCUMENT_TOKEN_TO_BE_REPLACED

“You’ve got to want to do it for the right reasons.”

It’s Week 4 and I know that the “weather” is getting rougher.. I hope our excursion together to the “beach” has been nice:

Let’s all learn from the wisdom of Rocky’s virtuous wife Adrian: We all have “got to want to do it for the right reasons”. Her profound pep talk to Rocky is reproduced below.

The Rocky spirit transcends the notion of “winning” or “losing” – it’s about going the distance. Perhaps our hearts may be made tired by time and fate, but our will should not – and must not – waver. It takes struggles in life to make strength, it takes principles to make fortitude, and singleness of purpose to reach an objective. Every intentional act of body, speech and mind is like seed planted that will grow when the conditions are right; thus as you sow and work hard and set your Heart on Fire, you shall reap.

We are all Rockys in this journey of Life and let’s encourage your friends and one another to excel in both the course and in SMU!