END_OF_DOCUMENT_TOKEN_TO_BE_REPLACED

Hong Kong Has a Goldin Touch

Goldin Financial’s fivefold share-price increase in the past year has made its owner, Pan Sutong, one of the richest men in Hong Kong.PHOTO: BLOOMBERG NEWS 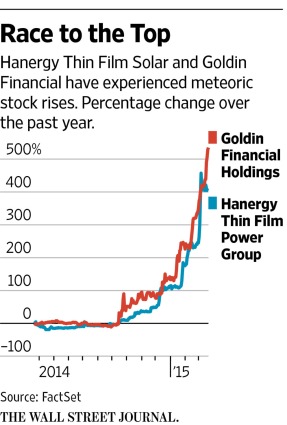 Hong Kong’s stock market has become a factory for overnight billionaires. It is probably not the sort of wealth that will stand the test of time. The most prominent case is Hanergy Thin Film Power, a solar company whose meteoric rise and curious business model has made its founder, Li Hejun, the richest man in China, by Forbes’s count. Hanergy, under suspicion in local media that someone is manipulating the stock, issued a statement Thursday to explain the rally, attributing it to a number of factors, including bullish brokerage research reports.

Another company is nipping at Hanergy’s heels. Goldin Financial, controlled by Hong Kong businessman Pan Sutong, has risen fivefold in share price in the past year. Mr. Pan is now the fourth-richest person in Hong Kong, according to Forbes. Goldin is larger than the combined value ofBank of East Asia, Hong Kong’s biggest independent local bank, and Cathay Pacific,the city’s flagship airline. Mr. Pan’s other holdings include a company that is building a 117-story skyscraper, the tallest in northern China, ringed by the country’s largest polo complex.

Goldin Financial provides short-term corporate financing known as factoring. It also owns wineries in France and California, wine storage in China and invests in property. For this, it trades at 116 times 2014 earnings. Nearly all of its profits last year came from fair-value gains on a commercial building in the Kowloon Bay area of Hong Kong that is under construction. Strip that out, and its price-to-earnings ratio is more than 1,000. END_OF_DOCUMENT_TOKEN_TO_BE_REPLACED

Not all audits are created equal. We need to ask questions

BRINGING in the auditors – or at least, promising or threatening to do so – seems to be the standard response to a controversy or a dispute these days. That’s a good thing for the audit industry because it enhances its profile and reflects the high regard for the profession. END_OF_DOCUMENT_TOKEN_TO_BE_REPLACED

MALAYSIA has seen only small-scale forensic accounting cases, mostly in the form of investigation audits done on Practice Note 17 companies, which has surged since 2000. So, the call on the Auditor-General to undertake a forensic audit on the government-owned fund –1Malaysia Development Bhd (1MDB) will be the largest by far in Malaysia’s corporate history.

According to Ferrier Hodgson MH director of forensic and investigations Liew Kim Yuen, the only investigation in corporate history that could be compared with 1MDB’s scale is the Bumiputra Malaysia Finance (BMF) scandal in 1983. END_OF_DOCUMENT_TOKEN_TO_BE_REPLACED

Is the Public Accounts Committee equipped to assess the work of Ambrin who has been tasked with verifying the books of 1MDB from 2009?

FORENSIC auditing has never been so widely discussed as in the last two weeks. And neither has the Auditor-General Tan Sri Ambrin Buang (pic) received so much attention.

It started when Prime Minister Datuk Seri Najib Tun Razak instructed Ambrin to “independently verify 1Malaysia Development Bhd’s (1MDB) accounts during a Cabinet meeting on March 4. Politicians from both sides of the political divide as well as observers propagated that the Auditor-General should undertake a forensic audit of 1MDB’s books to get to the bottom of its business transactions and find out why the six-year government fund is facing cashflow problems. END_OF_DOCUMENT_TOKEN_TO_BE_REPLACED

Alexander Chatfield Burns cut a dashing figure in young New York financial circles. Still in his mid-20s, he controlled a private-equity firm that owned several insurance companies. He called late-night meetings at a penthouse cigar club and donated the wine for a Guggenheim museum event from a vineyard he later bought. Then one day about a year ago, Mr. Burns checked into a mental-health ward at New York’s Bellevue Hospital, leaving behind an affidavit describing an unusual series of asset transfers. Soon after, he resigned from his company, Southport Lane Management LLC. Now, insurance investigators are sifting through the rubble. Delaware regulators say Southport under Mr. Burns siphoned off millions of dollars of mainstream insurance holdings, replacing them with assets that were “illiquid, grossly over-valued or hard to value, worthless, and in some cases non-existent,” as the state’s insurance commissioner put it in a filing in Delaware Chancery Court. END_OF_DOCUMENT_TOKEN_TO_BE_REPLACED